This is only valid for Japanese finishing stones (Tennen Toishi) not Aoto, Omura, Aizu or any other medium stones.

Many times, customers request the finest stones available for razors or knives and often ask the specific grit of these stones...Which is a very wrong way to think about Japanese natural stones in general!

Japanese Natural stones do not have grit like we see in synthetic or even some other natural stones. Instead, they have flakes. These flakes will release at different rates and patterns depending on how hard or compact the stone: harder stones release flakes at a slower rate than softer stones. Rather than releasing in non-friable chunks, these flakes will continue to break down in thickness and size when the slurry is worked on the J-nat. Thus, the harder the stone, the smaller the flakes produced while honing, and at a slower rate. This slow release of smaller friable flakes produce a finer finish. This is also why it is so important to flatten and completely smooth a J-nat finisher. Because no matter how hard the stone is, if the surface is left coarse, it will produce bigger flakes. The bigger flakes will result in a less fine finish!!

Also, if you take synthetic stones, the particles are cubed or rounded with extremely sharp edges (See Below). These particles will deeply gouge into the blade being sharpened, leaving deep and difficult to remove scratches. Synthetic stones are also produced by grit being super-compressed into a hard resin or ceramic binder, the particles break off in huge, non-friable, chunks and stay suspended in the slurry as you sharpen. This results in very fast metal removal, but also contributes to the deep gouging found when using synthetic stones. Conversely, friable J-nat flakes shave off the metal in small amounts leaving very shallow scratches. To really understand the difference between the finish obtained using J-nat and synthetic stones, you need to see the scratches in 3D, which is not possible since pictures are 2D images.

Below are pictures of J-nat slurry: 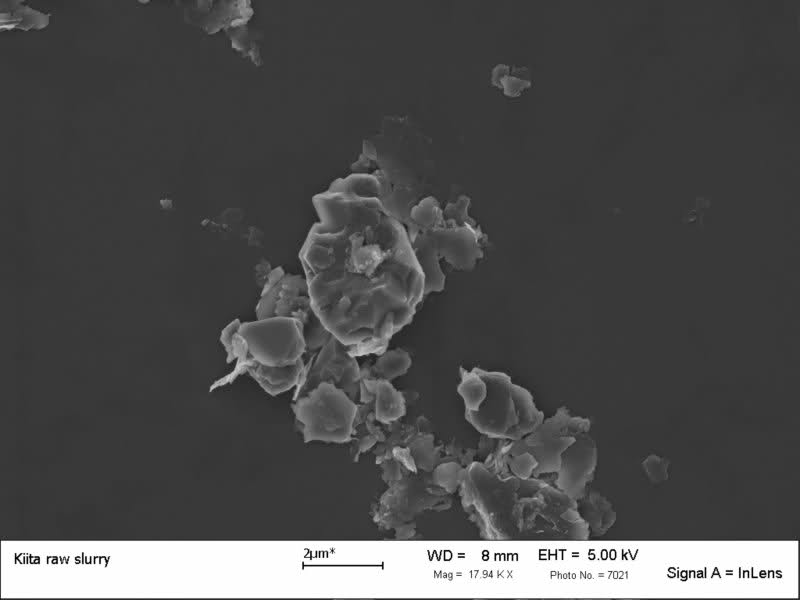 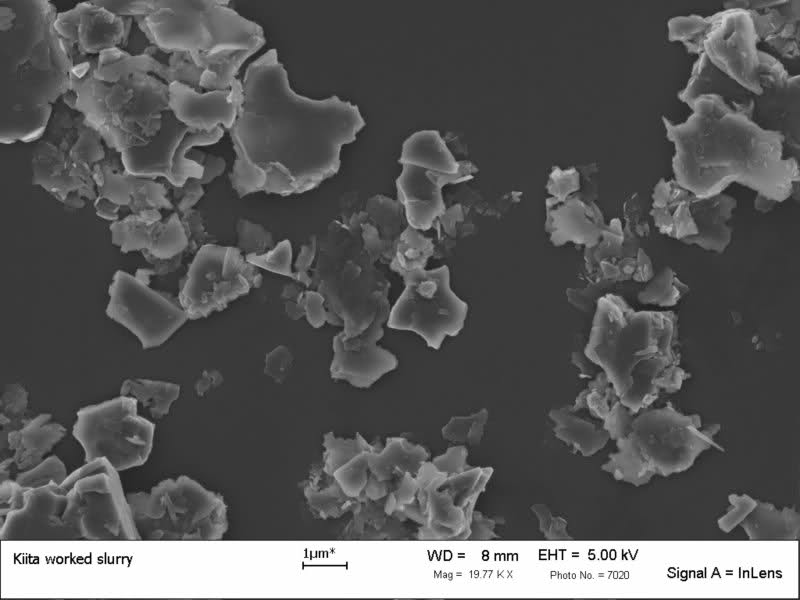 On JNats, there are many flakes. It is not the size of the flakes that affects the fineness, but more importantly, the thickness of the flakes. However, as you can see in the pictures, the thickness also varies a lot, and also changes depending on how much the stone is compressed, how strong the flakes are, or How Hard the stone is . Also note in the slurry pictures above; the J-nat flakes do not break down in size, but in thickness after being worked on the stone.

As you can see, it is impossible to answer what grit your J-nat is because J-nats do not have standardized grit! In the beginning, I wanted to try and portray hardness, fineness, and speed. I later discovered that all fall under the hardness of the stone, and hardness was the most important thing to look for. So you will only see a level of hardness listed with any stone on my website. The hardness levels range from Lv1-Lv5+, softest to hardest, respectively.

Of course, things are not so simple :). There are some exceptions: some stones have more speed then others. Some super hard Suitas can be very coarse, but they also release mud quicker then finer stones do.

Hope it helps to undestand more and how to use Japanese Natural Finishers  :)